NBA Western Conference Semifinals Predictions: Who will move on to the Western Finals? 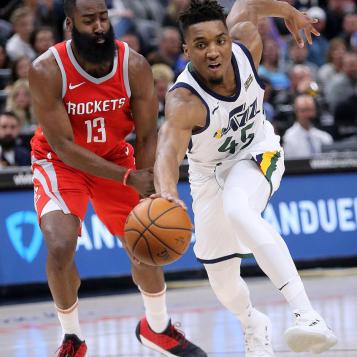 These teams meet again in the playoffs from 3 years ago in the first round. Both teams were completely different back then: Durant was not on the Warriors, Anthony Davis was only in his third year in the league, etc.

Now, the Pelicans are determined to upset the defending champs after sweeping the Portland Trailblazers. Despite the season-ending injury of Demarcus Cousins, the Pelicans have proved that they can still compete against the top teams without him.

It will not be as easy as it was last time for the Warriors to sweep the Pelicans.

Objectives to Win Series for Warriors:

The Warriors have fought through many injuries this regular season. However, this did not cause a problem for them in the first round of the playoffs as they still defeated the Spurs in five games without their two-league MVP Stephen Curry. Curry is ruled out for Game 1.

Curry is going to be a key factor for the Warriors in this series. No one knows if he will be able to contribute his usual amount of offense right away, or need a few weeks to be back to himself. For the Warriors to move on, Curry must be able to takeover games like he used to before and knock down crazy 3-point three point shots.

The Warriors may have answers to disrupt the Pelicans’ backcourt, but do they have one for Anthony Davis? Putting Draymond Green on him would cause a huge height advantage for Davis and would force Javale McGee to guard Mirotic at the perimeter. If the Warriors put McGee on Davis, then Davis would be able to beat him to the basket from the perimeter, which would cause many problems.

Under the mastermind of Steve Kerr, the Warriors always found answers to their problems, so Anthony Davis better be ready for whatever they throw at him on offense.

With Curry coming back, they must remind people of how good their offense is. They have to run the fast break, make threes, make threes, and… make more threes, and then maybe an occasional layup or dunk.

Objectives to Win Series for Pelicans:

Anthony Davis must take advantage of being one of the best big men in the league and dominate against the Warriors. Against the Blazers, he averaged 33 points, 12 rebounds, and almost 3 blocks and 2 steals per game. He provides a great all-around game with rim protection and stealing passes on defense, and is nearly unstoppable in the paint with a mid-range jumper and a inconsistent 3-point shot on offense.

However, Davis is not the only factor why the Pelicans swept the third seed in the west. Their lockdown perimeter defense from Jrue Holiday and Rajon Rondo limited the Blazers’ Lillard and McCollum offense.

However, they face a much greater challenge in the semi-finals against the Splash Bros. They are going up against a 6’7″ shooting guard named Klay Thompson who is an unstoppable spot-up shooter, and the 2x MVP Stephen Curry who can knock down shots from anywhere.

They also must find someone to guard Kevin Durant because E’Twaun Moore will not have a chance. Durant has a height advantage of at least 5 inches (Moore is 6’4″) which can cause many problems for the Pelicans defensively.

My prediction is that the Warriors will in 5 games. The Warriors’ offense will be too much to handle for the Pelicans and Davis would fall to them in the playoffs for the second straight time.

In the first round, James Harden taught us that no matter how bad he starts off the game, he will always finish off on a high note. With the help of Chris Paul, Capela, and Gordon and Green off the bench, the Rockets were nearly unstoppable offensively in the first round.

On the other hand, Donovan Mitchell shocked the world of how good he is as only a rookie. After losing Hayward in the offseason, Jazz fans did not have any hope for their team to reach the semifinals again in the following year.

After eliminating the malfunctional Thunder super-team, the young Jazz team look to battle the best team in the West for a spot in the Conference Finals.

Objectives to Win Series for Rockets

James Harden and Chris Paul must takeover these games. They cannot allow a rookie and the Jazz’ backup for Ricky Rubio to outplay them. In the last two games, Harden showed his ability to dominate one quarter and significantly change the outcome of a game.

Paul, on the other hand, had on and off games but Harden or the Rockets’ supporting cast always picked up the slack. As long as one of them shows up each game and contributes a great deal of offense, the Raptors should be in good shape.

However, it is not just about Harden and Paul. The Rockets’ starting front court and bench players have had just an important role as their two stars. Whenever Harden and Paul fail to show up, their supporting core never disappoint.

In Game 1, Capela provided 21 points in replace of the struggling Chris Paul. In the following game, when Harden had a bad game, Gerald Green had 21 points off the bench. In the final game of the series, Capela led the team in scoring with 26 points, and Ariza, Tucker, and Gordon hit a combined 12 threes to hide the struggles of Paul and Harden.

Objectives to Win Series for Jazz

Donovan Mitchell has proved that he can step up and take over on the bigger stage in the first round. Hopefully, he does not shy away in the second round. In 6 games against the Thunder, he averaged 28 points and 7 rebounds per game. As a rookie. For the Jazz to have some kind of chance to win, they need Mitchell to continue to play the way that he has been doing.

Unfortunately, the Jazz lost Ricky Rubio to a hamstring injury for possibly the whole series. After Rubio left the floor in Game 6, Donovan Mitchell handled the ball most of the time, with Ingles also taking more responsibility. The Jazz will probably give the starting role to Alec Burks, who saw increased playing time due to Rubio’s injury.

The Jazz must be able to find someone that can create their offense without Rubio. This means that Mitchell, who is not so great as a playmaker, will be expected to take the point guard duties and have a heavier load offensively in this series.

Defensively, the Jazz need to focus on guarding the perimeter. The Rockets rely heavily on their shots from behind the arc more than any part of their game, and if they cannot stop them, the Jazz will be in trouble.

This should be an easy series for the Rockets. Their backcourt duo will be too much to handle for Mitchell. My prediction is that the Rockets sweep the Jazz in four games, but it will definitely be a hard-fought battle until the final buzzer.